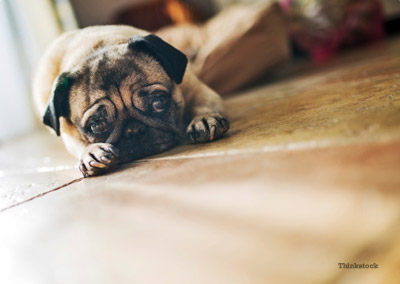 Zee Mahmood, a veterinary student at St. Matthews University, contributed to this article.

Urinary incontinence is the inability to hold urine, resulting in leaking or dribbling. There are several possible causes in a puppy with incontinence. While this may initially be written off as a house-breaking problem or an ongoing bladder infection, it is possible that the puppy has “ectopic ureters.”

Such was the case for Rosie, a sweet 7-month-old female American Bulldog who was abandoned, very likely due to her incontinence. Rosie was leaking urine constantly, day and night, and her back end was wet all of the time. The lady who rescued her knew right away that she needed veterinary care.

What are ectopic ureters in dogs?
The urinary tract of dogs is exactly like ours. It begins with the kidneys, which act as filtration system, continuously transforming toxins into urine. A tiny tube, called the ureter, transports urine from each kidney to the bladder. Urine is then stored in the bladder, normally at which point it is voluntarily emptied through a tube called the urethra.

With ectopic ureters, one or both of the ureters do not connect normally to the bladder. Instead, they bypass the bladder and go into the urethra, or in females, the vagina or the uterus. Since these organs are not equipped for urine storage, like the bladder, leakage results, and the puppy is incontinent.

Ectopic ureters most commonly affect female puppies, such as Rosie, although males can also have this condition. It is caused by abnormal development in the embryo.

Rosie’s vet exam
Rosie was kept for observation. A urine culture (i.e. a sterile swab) was sent to the lab to check for a bladder infection. Once behavioral problems and infection were ruled out, ectopic ureters were high on the list of her new family veterinarian as a reason for the leaking.

Rosie's veterinarian performed a series of tests to determine if ectopic ureters were indeed the cause for her condition. An intravenous pyelogram, or IVP, was performed. This is a series of X-rays in which a special dye is given IV. X-rays are then taken at different times, showing the dye flow through the kidneys, the ureters, and the bladder. The dye is necessary since the ureters are too small to be seen on a regular X-ray.

Rosie's IVP showed urine flowing through the kidneys and the ureters normally. However, the urine was not going directly into the bladder. Instead, the ureters ended in an abnormal space around the bladder. This confirmed the diagnosis of ectopic ureters.

To further determine exactly where the ureters were emptying, Rosie's vet performed cystoscopy to look inside her bladder with an endoscope. The endoscope consists of a very small tube with a camera inside it. It can be placed inside body cavities to visualize problems at the source. With the help of the endoscope, the doctor was able to identify exactly the location of the opening of the ureters. In Rosie's case, the ureters were intramural, meaning that they were traveling between the layers of the bladder wall.

Rosie’s surgery
Once the diagnosis was confirmed, Rosie needed surgery to reopen the ureters where they belong (neo-ureterostomy). The board-certified surgeon made a new opening on either side of the bladder, reattached the ureters into these openings, and created proper drainage of urine into the bladder.

In other patients, where the ureters completely bypass the bladder, a different procedure would have been needed —neo-uretero-cystostomy. Here, the ureter is cut off the abnormal organ (urethra, vagina or uterus) and reconnected to a new bladder opening to properly drain urine.

Rosie recovered well from surgery. She went home on antibiotics and pain medications. Instead of leaking urine all the time, she instantly could hold it and use control when she had to urinate.

Unfortunately, she could not hold her urine for long periods of time. She could control it without leaking, but had to go much more frequently than normal. Her veterinarian reasoned that this was because her bladder sphincter was too weak to work properly. It is important to remember that surgery alone may not be enough to make a puppy entirely continent. Rosie was prescribed a medication (phenyl-propanolamine) that strengthens the bladder sphincter, commonly used for incontinence in older female dogs. That solved the problem.

Rosie now has a dry and happy new home and a new lease on life thanks to the generosity of her rescuer and the efforts of the veterinary and surgical team.