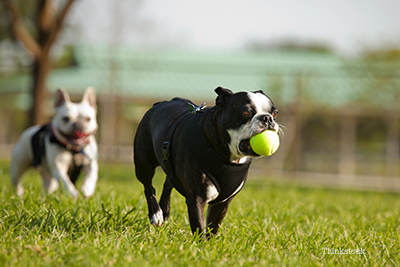 “Why don’t you let your dog loose so he can play with the other dogs?”

It was a postcard perfect day for a romp at the local dog park. Gopher was enviously eyeing his companion canines running freely inside the fenced-in dog park. His guardian, Todd, had always been a little hesitant to let Gopher off-lead with strange dogs in the park.

“I think we’ll skip it this time. I don’t know all those dogs.” Todd replied with an aw-shucks smile and nod to Gopher.

“Come on, it’ll be good for your dog. Mine has been in there for almost an hour having a blast. Unless maybe your dog is one of those that bites?” The stranger said this with a trace of condescension and a heaping dose of dare.

“Sure. Why not?” Todd unclipped Gopher and opened the gate. “Go get ‘em, boy!” With that, Gopher charged off.

The rules of dog parks
Rule number one of dog parks: Never, ever allow your dog to interact with strange dogs in an uncontrolled setting. In other words, letting your pooch run free with dogs you don’t know is a bad idea. It’s not your dog you should be worried about; it’s all the others.

At first Gopher seemed to be making friends. He was a decent-sized dog, a Lab and Beagle mix, who’d never met an animal or person he didn’t instantly like. Gopher was displaying all the appropriate, “Let’s play! I’m a friend!” gestures and Todd began to relax. That is, until a cocky Cocker spaniel sauntered toward Gopher.

Rule number two of dog parks: You can’t judge a threat by its size. A pint-sized poodle can do significant damage to another dog or person.

Even though Gopher had a good twenty pounds on the Cocker, he clearly wasn’t in charge. The Cocker sniffed Gopher a couple of times, and, in a flash, snapped Gopher three times along the neck and shoulder. Gopher tumbled to the ground, and, before he could recover, the Cocker was gone. Todd covered the hundred or so yards in record time to find his best buddy panting, shaking and whimpering in fear. Todd looked Gopher over and didn’t see any obvious bleeding or open wounds. As he led Gopher out of the park, he heard the stranger remark, “Guess some dogs just aren’t cut out for the playground.”

The rules about bite wounds
Rule number one of bite wounds: Have your pet examined by a veterinarian immediately. You can’t always judge an injury on your first look.

Todd didn’t know my bite rule and took Gopher home, bathed him, cleaned the wounds, and gave him an extra helping of wet food.

Unfortunately for Todd, research published in the April 2011 edition of Clinical Microbiology Reviews documented that dog bites are brimming with bad bacteria. Not cat bite level of pathogenic nastiness, but close:

These are some of the infection-causing bugs commonly found in dog bites. Despite Gopher’s wounds “not looking too serious,” seething beneath the skin was a potpourri of pus swelling by the hour.

Two days after Gopher’s Cocker confrontation, he was so weak and febrile he could barely lift his head. By the time I saw him, he had three awful abscesses that required sedation to surgically lance, place drains, and anti-inflammatory and antibiotic injections. Gopher’s five minutes of free fun cost Todd almost $500.

Rule number two of bite wounds: Dog bites can be disastrous if not treated promptly. Early and aggressive antibiotics combined with flushing with antibacterial solutions often avoid abscessation and surgery. Gopher made a full recovery over the next ten days and Todd learned his lesson for life.

I love going to dog parks. As long as I know, and trust, the other dogs, I’ll let my dogs play freely in fenced-in areas. When we meet a new dog, we introduce everyone in a closely supervised, controlled setting. Once we determine that everyone gets along, it’s playtime! Any bite wound or laceration, no matter how seemingly insignificant needs immediate, veterinary attention. I see too many pets that if I’d only been able to treat earlier, I could’ve saved a tremendous amount of suffering and their guardians a load of cash. Remember my rules and safely enjoy your doggie play dates!