Chloe’s Giant Tumor: What is This Lump on My Dog? 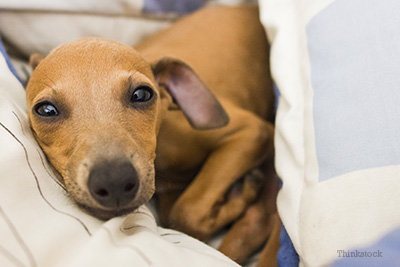 Chloe was a sweet 12-year-old Italian greyhound, who had had a mass hanging between her back legs, "for several years,” according to her guardians.

Because the mass initially didn't seem to cause any problems, the guardians didn’t think it was a big deal. In addition, they were worried about putting a 12-year-old dog under anesthesia to have the mass removed. Unfortunately, waiting was not helping Chloe. Eventually, the mass started to bother her: she was having difficulty walking.

Meanwhile, the mass had reached the size of a grapefruit. To put this into perspective, Chloe weighed about 12 pounds.

Diagnosing a canine mass
Chloe’s family veterinarian had done several fine needle aspirates to try and determine how bad the mass was. However, every test was deemed inconclusive. This means that either there were not enough cells in the samples, or that the cells were too damaged to reach a diagnosis. But my colleague’s suspicion, given the size and the firmness of the mass, was that this was some form of cancer.

After Chloe was referred to me for surgery, I had a heart-to-heart with the guardians to make sure they understood the facts of anesthesia and surgery. Click here to learn about the many misnomers surrounding anesthesia.

I explained that we could not assume anything about the final diagnosis. We discussed the possibility of taking biopsies before surgery, which would require sedation and additional expenses. The guardians’ philosophy was that the mass had to come off anyway, so a biopsy wasn’t necessary. They just wanted to get this ugly tumor off to help their dog. And so we took Chloe to surgery.

Could the mass be life threatening?
When the nurses and other doctors in the practice saw the mass, they all shrieked and commented on how big and firm it was, how sad it was that this poor dog had cancer and how challenging the surgery would be. One was convinced that the mass was fluid-filled. Another was sure that it was cancerous.

The mass was firmly attached between the back legs, extending toward the belly and growing along the left, inner thigh. It was truly huge compared to poor Chloe’s fragile little leg. It really had reached grotesque proportions.

Trying to ignore the comments and remain confident that I could remove the mass and do the right thing for my patient, I started going through various options to perform the surgery.

Surgical removal of a mass
Without getting into graphic details, I started to remove the mass. To my surprise, it quickly appeared that the entire mass was filled with fatty tissue. In other words, there was a decent chance that this mass was a benign fatty tumor (a.k.a. a lipoma). Yet this had been the last possibility on everybody's mind.

We reconstructed the skin of the belly and the left back leg in a way that made everything look pretty cosmetic at the end of the surgery. Chloe, in spite of her advanced age, woke up smoothly from her anesthesia.

The mass, which weighed about 2 pounds (remember, Chloe weighed about 12 pounds), was sent for analysis to the lab. Now we had to patiently wait for the results for about a week.

Chloe went home with instructions to wear a plastic cone around her head to prevent licking at the stitches. She had to remain very quiet for three weeks. She went home on antibiotics and pain medications for one week.

What was the mass?
Right on schedule, a week after surgery, the biopsy results came back. And sure enough, the pathologist confirmed the diagnosis of a benign fatty tumor called lipoma (a completely unexpected final result).

This successful story is a great reminder not to jump to conclusions.

What should you know about masses and your dog?

Chloe’s guardians were very lucky that we were able to reach excellent results. Clearly, Chloe was lucky as well: she went from having difficulty walking with a giant mass between her back legs, to a completely clean bill of health.

Questions you can ask your veterinarian in a similar situation