5 Dog Diseases Vets Don’t Think You Know, But Should

Having a dog is pretty great, am I right? Coming home to a big smile and wagging tail can sometimes make your day. In return, what can we do as dog parents to ensure they’re living the happiest, healthiest, lives possible?

I already know how important routine veterinary visits are, but I found myself wondering what exactly my veterinarian is looking for at these appointments.

To help educate myself and any other curious dog parents out there, I asked 7 veterinarians, ”What are the 5 top dog conditions pet parents should be aware of?" Here’s what I got back: 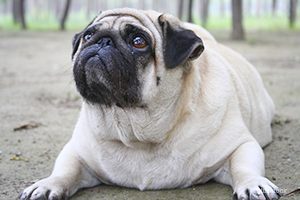 According to the Association for Pet Obesity Prevention (APOP), the 2014 National Pet Obesity Prevalence Survey discovered more than 50% of dogs in the U.S. are overweight.

When your dog is overweight he is at risk for several other concerns such as:

Sure, wrinkles are cute but only in the right places. If you think Spike is pushing the pounds, a trip the veterinarian might be in order.

For 5 must ask questions to ask your vet about obesity, click here >>

For ways to help your dog lose weight, click here >> 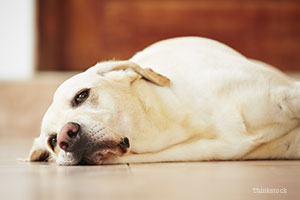 You know that feeling when you’ve had too much to eat or drank too much water? You feel bloated but it usually goes away, however, when this occurs in dogs it can be life threatening. Commonly known as “GDV” Bloat happens when a dog’s stomach becomes distended- usually by gas, food, and/or liquid and then twists.

Once the stomach is bloated, it can easily rotate out of position and twist, and if not treated immediately it can be fatal. Signs include:

For more information on this serious condition, click here >> 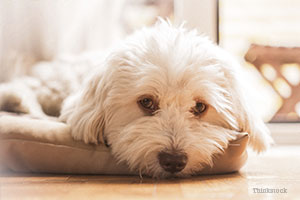 While cancer is one of the leading causes of death in older dogs, it can be extremely hard to detect early. According to the Animal Cancer Foundation (ACF), 1 in 4 dogs will develop cancer in their lifetime.

Annual veterinary visits will help with detecting cancer early. While your veterinarian will do her part, you can do your part as well by looking for symptoms such as:

Hearing your dog has cancer can be a devastating to say the least. However, if you’re able to find it early, treatment always has a better chance. Going to regular checkups and knowing the symptoms is already a great start.

To learn more about cancer in dogs, click here >>

4. Urinary problems
Even after puppyhood, some dogs may have the occasional accident in the house (learn about house training here). If you are past the training period and your dog seems to be having frequent accidents, it might be due to a medical issue, and you should tell your veterinarian. 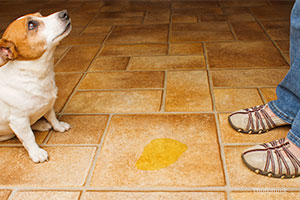 Learn about other pee related issues:

Ticks are nasty little bugs that carry several different diseases that not only affect dogs, but can infect people as well. It’s important to know what these diseases are and where they thrive.

• Lyme disease is transmitted by the eastern black-legged tick (commonly known as the deer tick) and the western black-legged tick. It has been found throughout the U.S. and even some Canadian provinces. They mainly thrive in the northeast and mid-Atlantic regions, from northeastern Virginia to Maine; north central states, mostly in Wisconsin and Minnesota; and the West Coast, particularly northern California. Symptoms of Lyme disease include: 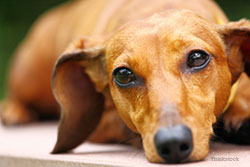 • Ehrlichiosis is transmitted by the brown dog tick and the lone star tick, which is commonly found throughout the U.S. and Canada. There are 3 stages of symptoms, first: 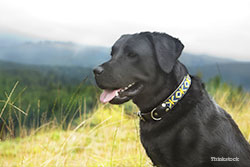 • Rocky Mountain Spotted Fever (RMSF) has been found throughout the U.S. and Canada, however it thrives in California, Idaho, Washington, North Carolina, Arkansas, Tennessee, and Missouri. It is transmitted by the American dog tick and the lone star tick. Symptoms of RMSF include:

• Anaplasmosis, or “dog tick fever,” has been found throughout the U.S. and Canada, but it thrives in California, as well as the northeastern, mid-Atlantic, and north-central states. It is transmitted by the western black-legged tick and the brown dog tick. Symptoms of Anaplasmosis include:

• Hepatozoonosis is not your average tick-borne disease. It comes in two different forms, and unlike the others, both forms are transmitted by ingestion of an infected tick, rather than a bite. Cases of Hepatozoonosis have been found in the eastern and middle-southern regions.

The first form is Hepatozoon americanum, which is transmitted by the Gulf Coast tick and can be fatal. Symptoms include:

The other from is Hepatozoon canis, which is transmitted by the brown dog tick. Symptoms include:

It’s important to know which disease is in your area; lucky for you, there’s a prevalence map that does just that.