The Saint Bernard is likely a descendant of Roman Molossian dogs and belongs to the Molosser family. He was first used by farmers to pull carts, guard property and help with chores. In 1670 a few of these dogs were given to monks at the Saint Bernard Hospice to protect it from bandits. It didn’t take long for the monks to realize Saint Bernards were also very capable trackers. The monks started using Saint Bernard dogs to locate travelers who were lost in the Alps between Italy and Switzerland.

One particularly famous rescue dog, named Barry, is believed to have saved anywhere between 40 and 100 lost travelers during his lifetime. For a time the breed was even called Barryhund. Other names have included Alpine mastiff, Alpendog and Sacred Dogs.

In the early 1800’s harsh weather and avalanches led to the death of many Saint Bernard dogs. The monastery had only a limited breeding pool and so they tried crossbreeding with Newfoundlands. The result was a larger Saint Bernard with longer hair. Although it was initially thought that long hair might help a snow dog it actually hindered them when their hair froze in the frigid conditions of the Alps. As a result Saint Bernards were no longer used as rescue dogs.

Saint Bernards became popular in England in the 1800’s and in America after that. The first Saint Bernard club in America was formed in 1887 and his popularity skyrocketed. 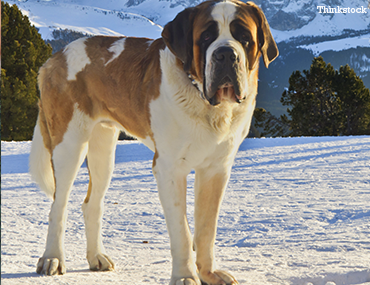 The Saint Bernard has an easygoing and relaxed temperament. His warm and caring lineage is what makes him such a great therapy dog to this day. He’s good with kids but is also large enough to knock them over so supervision is required.

The Saint Bernard, and really all large dogs, need to be trained not to pull when they’re still young. Otherwise you’re likely to be tugged all around the neighborhood when they grow up. It’s important that you be assertive yet kind during the training period.

A Saint Bernard might bark at intruders and it’s important that they meet new people and animals when they’re still puppies to become properly socialized.

The Saint Bernard doesn’t require as much exercise as a hunting dog would but he will enjoy a daily walk. He’ll also need to have frequent grooming.

The size of the Saint Bernard can lead to issues of the bones: