The origins of the pug are very ancient indeed. The breed is rumored to have flourished before 400 BC and to have contributed to both the English Bulldog and Pekingese breeding lines.  The Pug is likely Chinese in origin, where they were owned first by monks.

In the 16th century the Pug was brought to Europe by the Dutch East India Company where it became the official dog of House Orange. A Pug by the name of Pompey saved the life of the Prince of Orange in 1572, perhaps cementing his breed as royalty for years to come.

A Pug followed William III to the throne of England in 1688, at which time Pug popularity skyrocketed. Pugs have appeared as companions to such notable figures as King Louis XIV; Josephine, empress to Napoleon; Queen Victoria and the Duchess of Windsor.

In the 18 century the Pug became a muse for William Hogarth. His self portrait includes one of his pet Pugs and now hangs in London’s Tate Gallery. In 1790 Italy, Pugs were seen poking their heads out of just about every carriage and window of upper class citizens.

In 19th century England Queen Victoria bred her own Pugs. She also played a major role in establishing the Kennel Club, formed in 1873. It was during the 19th century that Pugs arrived in America. The breed was recognized in the U.S. in 1885. A Pug won best in show in both 1981 and 2004. 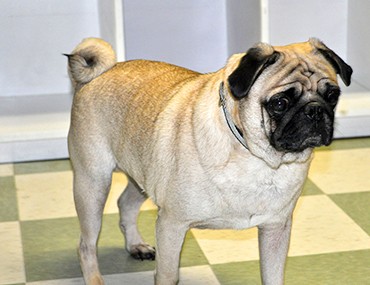 The Pug is fun loving and happy. He has been an endearing dog for centuries and is happiest spending time with the family. He’s outgoing and polite, great with children and with meeting strangers. He’s larger than most toy dogs and generally tougher, better able to tolerate playtime.

The Pug can be easily trained although is notoriously subtle when he needs to go outside and use the bathroom. Extra attention should be paid during this adolescent phase.

The Pug is a house dog. He would not be a suitable running partner or mountain climber. He simply wasn’t bred for that.

The Pug was bred very differently from many of the hunting breeds, and as a result requires that some special precautions be taken. For one thing he’s not able to tolerate heat, even temperatures as low as 80 degrees Fahrenheit might be too much for a Pug. He must live indoors and be kept cool at all times.

The Pug is prone to breathing disorders and likely to snore: This being a result of his flat face.

The breed is often affected by hip dysplasia, with some studies suggesting more than half of pugs will have it at some point. Prolapsed eye is also fairly common and can be caused by trauma to the head or neck.

Other medical issues that could affect the pug include: