The Irish Setter is now famous for his mahogany/red hair, but there was a time when this breed was actually red and white. The first Irish Setters are reputed to be a blend of spaniels, terriers, pointers and the Gordon. They were most commonly used for hunting, to “set” birds. Meaning they would crouch down near fowl and wait for the hunter to throw a net over both of them. The all red Setters first appeared in the early 1800s.

Possibly the most important Irish Setter in history was Champion Palmerston. Born in the 1860s Palmerston had a longer neck and sired so many pups that nearly every Setter alive today can be traced back to him.

In recent times Irish Setters have been used more as show dogs than as hunters, but breeders have tried to maintain all the traits that made them so popular in Ireland. 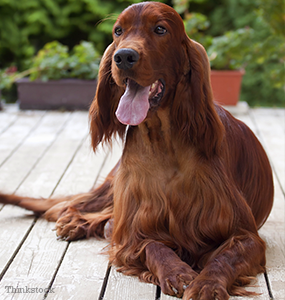 Setters were born to hunt and they have the sprit and energy to back it up. They won’t be happy spending the entire day inside. In fact they’ll likely become destructive without frequently having room to run. If it’s necessary for a Setter to be an apartment dog there should be a park nearby, preferably something that’s enclosed; otherwise, the Setter could easily run after a bird and end up in the street.

Early training is vital for a well behaved Setter but even with that be prepared for your Setter to become distracted sometimes and ignore your commands.  Setters are notoriously selective listeners but always respond well to rewards. They’re alert dogs and likely to see people coming but because they’re not aggressive they wouldn’t be the best guard dogs.

Setters are friendly and fun around children. They take a long time to mature, perhaps meaning they can relate better with kids than other breeds would. This slow maturity might prove to be a frustration for adults though. Don’t get a Setter if you wouldn’t enjoy several years of having a puppy.

Setters are usually healthy but a wide variety of conditions have been reported: