The Cairn Terrier, like the Scotch and West Highland, originates in Scotland and on the Isle of Sky. They were primarily used for hunting foxes, badgers and otters. They have existed since the 15th century and probably still closely resemble the original terriers of that time period. Until 1873 all Scottish terriers were grouped together. After 1873 they were divided into the Dandie Dinmont and Sky Terrier groups, with Cairns being part of the latter. The groupings continued to subdivide until 1912 when the Cairn was named as an individual breed. The name Cairn comes from the stone memorials that had been erected in Scotland at the time. Prey often sought refuge under theses stones when being hunted by terriers.

Cairn Terriers stayed on their farms until the early 20th century when they found a place in the show ring. The American Kennel Club recognized the Cairn in 1913.

The Cairn became famous after he was chosen to play the role of Toto in the Wizard of Oz. 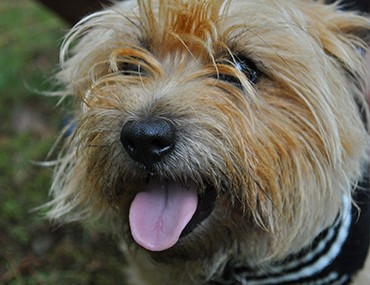 Cairns are the quintessential terrier. They have spunk, tenacity and energy. Don’t expect them to be a lap dog. They were bred to hunt and require a daily workout. They have an attitude of independence and won’t tolerate being forced into anything.

When it comes to training, Cairns are fairly sensitive. They respond to positive reinforcement and games that can keep them entertained. Cairns learn quickly and so they can get bored easily. KONGS would make an excellent toy because Cairns enjoy solving puzzles and love food. Consistent training and engaging activities will keep the Cairn from digging up your backyard or eating through your couch.

Although force isn’t ever required with Cairns, don’t make the mistake of appearing weak in front of them either. They can easily take control of the house and your life if allowed to do so.

Cairns can’t live outside; if the weather is bad it would be better to play with them inside. They’re great with kids although the interaction should be supervised to prevent the dog from being stepped on. (They often misjudge their own size.)

Sometimes Cairns will just need to explore, they might be curious about sights or smells and could easily go chasing after small creatures. They’re an excellent fence climber so be cautious when you have them outside.

While generally healthy some hereditary conditions are more common in Cairns than in other breeds: