The Airedale Terrier, also called “king of terriers,” was first bred in the English Airedale Valley. He was prized for his hunting abilities, usually hunting alongside hounds. After the hound (often the Otterhound) located small game the Airedale would chase it down and retrieve it. The Airedale would also often be used to poach game from the property of the social elite.

The Airedale is descendant from the now extinct Black and Tan Terrier. Ch. Master Briar is considered the father of the modern day Airedale. Master Briar’s two sons also had an important influence on the breed, particularly in America.

Airedales were used as messenger dogs during World War II, where they were considered war heroes. Their duties eventually evolved from delivering messages, to finding wounded soldiers and calling for help. After military duty was over, Airedale’s were used by police who needed protection during dangerous nighttime patrols.

In America the Airedale became a favorite of presidents: including Woodrow Wilson, Warren G. Harding and Calvin Coolidge. Harding even had a chair made so that his Airedale could sit in on important meetings.

The Airedale was recognized by the American Kennel Club in 1888 and soon hit his peak as the 20th most popular dog on the AKC registry. His numbers have declined ever since. 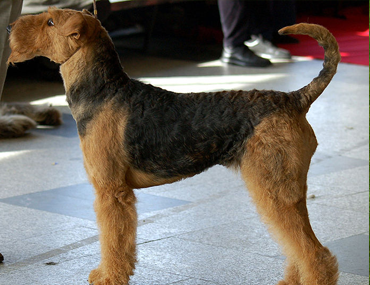 The Airedale has an impressive history. He has been a hunting dog, a companion dog, and a search and rescue dog. Today his favorite job might be to just play with the kids. Whatever his capacity is, the Airedale wants to be top dog. He won’t do well with pets that challenge his authority. He also has a strong inclination to chase smaller animals, dig, and bark.

The Airedale will be a strong watchdog, and takes his duties as a protector very seriously. He’s bold, strong and independent which can make training frustrating. He’s energetic and playful so plenty of daily exercise is a must, especially if you want to avoid household destruction while you’re away.

His coat requires regular maintenance: brushing twice a week and a cut every two months.

The Airedale is generally healthy but any breed has the potential to develop certain conditions.

These are all conditions to watch out for in the Airedale: