Constipation and Megacolon Casestudy: Can Surgery Save A Cat from Misery?

Constipation
Buster, an 8 year old neutered male kitty, came to his family veterinarian after his owner noticed a few piles of vomit on the floor. Over the past few weeks, Buster had been straining to defecate in the litter box. After a physical exam, the vet explained that Buster had severe constipation. Doesn't sound like that big of a problem, right? Actually, this is an all-too-common problem in cats. It sometimes goes unnoticed or untreated, for months to sometimes years.

You may have noticed that most cats don’t drink much, and their stool is typically harder than dogs’. So it doesn’t take much for a cat to become constipated. Constipation occurs when a pet has difficulty passing stool, and does so in smaller amounts or less frequently than usual. [Editors note: Frequent constipation in cats can be caused by a defect when the muscles of the colon try and contract. Constipation can lead to megacolon if too much waste accumulates.]

Buster’s Doctor discussed the potential need for surgery in the future, but at this stage, it was reasonable to treat him with medications and diet. Buster’s veterinarian administered an enema that helped remove the fecal material under sedation. He sent him home with the following treatment:

Megacolon
Over the next few weeks Buster did well. For the most part, he had normal bowel movements, ate well, and except for the occasional hairball, had no more episodes of vomiting. Soon, Buster’s owners stopped paying close attention to his stool, and when the symptoms started to return they didn't notice right away. 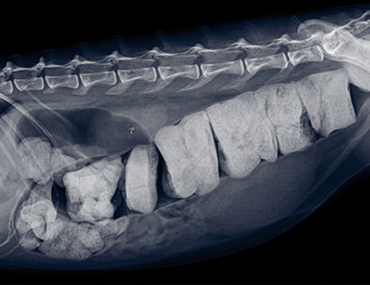 His appetite decreased slightly, he began having more trouble producing a bowel movement, and he started hiding because his belly hurt. His coat was unkempt, as he stopped grooming. He became dehydrated.  It wasn't until the vomiting returned that his owners realized that something was wrong. They brought him back to the vet.

At this stage, the colon was enlarged beyond the point of no return (megacolon). The muscles around the colon were so stretched that they were permanently damaged. Enemas and medications wouldn’t work anymore. After another discussion between Buster’s owner and the veterinarian, it was decided that surgery was the best option at this time. Otherwise, at this stage, the only humane alternative would be euthanasia.

During surgery, most of the stretched colon was removed and its ends were reconnected. It’s a fairly technical surgery, but in experienced hands, we typically see great results. Affected cats go from months or years of misery, to comfort and happiness.

One important job of the colon is to absorb fluid, so Buster's owners were informed that he would likely have soft stool or diarrhea for a few weeks. Medications (lactulose and cisapride) were discontinued, and the fiber-rich diet was not needed either.

Two weeks later, skin stitches were removed. Surgery was successful and Buster did very well in the following weeks and months. The body, being the amazing machine it is, adapts over time and after a few weeks Buster began to have normal bowel movements again. He went on to live a happy and healthy life.

As a surgeon, my wish is that cat owners realize that surgery relieves cats affected with megacolon very nicely in the vast majority of cases. And I wish this life-altering surgery were done sooner in the course of the disease. Often times, for reasons that I just cannot understand, many cat owners are in complete denial about their cat’s condition and suffering. Earlier intervention would avoid a lot of pain and misery for these cats.  With surgery, they can be comfortable and happy again.