The Vet Files: Why Is My Cat Suddenly Peeing on the Floor?

A friend and cat lover recalls: "My cat, Catnip, peed on the floor! At first, I was so mad at him. I locked him up in the basement with his litter box, food and water. The urine looked a little red, but I was convinced he was fine since he was acting normally otherwise. [He was] Just being a bad boy [and] not using his litter box!"

Two days later, my friend woke up and noticed that Catnip had gone in and out of his litter box multiple times.  She assumed that he was either getting diarrhea, or that he was constipated--both assumptions are common but wrong.  Because she had to go to work, Catnip went back to the basement.

Ten hours later, when she got home from work, there was nothing in the litter box! She looked around the basement for Catnip and found him hiding under an old armchair. When she pulled him out, he wasn't fighting as he usually does.  He was clearly in pain.  He seemed quite depressed and cried a weaker meow than usual. I told her to rush Catnip to the emergency vet hospital where they confirmed my suspicion: Catnip was "blocked." 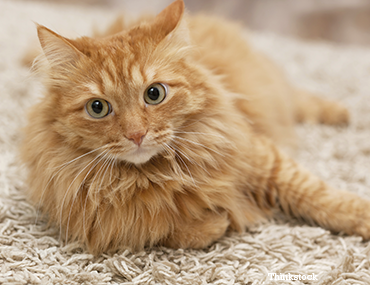 Blocked? As the emergency vet explained, male cats can have urine that forms crystals or debris which clumps together and can cause a blockage in the urethra (i.e. the narrow tube that leads urine out of the bladder). This can either partially or completely prevent male cats from urinating.

A complete blockage is both painful and dangerous. It can cause a number of life threatening conditions, for example, if a cat (or a dog) cannot pee, their bladder gets very large, and becomes at risk of rupturing. There are also consequences for other organs including the kidneys and the heart.

At the clinic, Catnip was immediately given pain medications. Blood work showed abnormal kidney values, as well as an increased potassium level, which is toxic. He then received sedation and was "unblocked" with a tiny urinary catheter. Catnip stayed at the vet hospital overnight on IV fluids and pain medications.

When the vet called the next morning, he said Catnip was doing well and his urine was becoming clear (i.e. less bloody). His bloodwork was getting much better along with his mood! Although this was Catnip's first time blocking, the vet was concerned that this could happen again, which is not uncommon.

The vet recommended a special canned food and a few other things to try helping the "medical way."  But my friend's concern was that should it happen again, she may not realize it for hours as she typically worked "crazy hours." Could it be too late the next time around?

Another option for her to consider is a surgical procedure called a perineal urethrostomy or "P/U." The goal of a P/U is to remove the penis in order to reach an area of the urethra that is much wider than the tip. The lining of the urethra is then stitched to the skin. If a stone or debris were to form in the bladder, it would travel down the urethra and would be expelled instead of causing a blockage--and no, male cats are not turned female in the process!

Although P/U surgery sounds invasive cats tolerate it very well. My friend gave the go ahead for the procedure. Catnip recovered well and was sent home the day after surgery, along with a plastic cone, antibiotics, pain medications and a special urinary diet. Catnip had to be confined to a small area for two weeks, at which point the sutures were rechecked.  Everything has been fine since. Catnip must stay exclusively on his special canned urinary diet for life. He is now one happy kitty, and my friend is relieved.

My only other suggestion was to take a look at www.indoorpet.osu.edu because "blocked" cats are often secretly stressed out kitties that need help beyond special food and surgery.