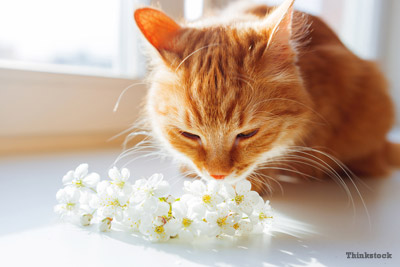 Ever see a little kitten wrinkle its nose and let out with a cute sneeze?  It sounds sort of like “Pfft!” and may or may not be accompanied by a few droplets.

We all sneeze on occasion for what is seemingly no reason. As you might imagine, If your cat sneezes once in a while, and is otherwise active and normal, it is probably nothing to worry about. However, if your cat’s sneezes are more than occasional or are accompanied by blood or mucus, or if your cat has a concurrent discharge from his eyes or also has a cough, the sneeze may be a sign of more significant problems.

Whether you’re concerned, or just curious, read on for some possible reasons why your kitty might sneeze:

1. A simple, benign tickle
This may be the most obvious cause for sneezing. A simple tickle in the cat’s nose, such as a bit of dust or a mild chemical irritant, can cause a reflexive sneeze. Think of the animated cat that sneezes when he inhales a bit of pepper. This kind of sneezing is not unlike scratching a tickle or an itch.

Less commonly seen fungal infections can also cause sinus disease that results in nasal inflammation. Viral respiratory infections may be accompanied by a cough and even more commonly by excessive tearing or discharge accumulating in the eyes.

3. Chemical irritants
On occasion a noxious smell or chemical fumes associated with various solvents can produce inflammation of the membranes of the nose and sinuses. Sneezing is the body’s way of ridding itself of that irritation. Some cats can also be sensitive to inhaled tobacco smoke, perfumes and various chemicals.

4. Foreign bodies
Nasal foreign bodies such as blades of grass or grass awns can find their way into the nasal cavity. The result is first, irritation and if the object is not expelled (“sneezed out”), there is a likelihood of a nasal infection.

5. Dental disease
Dental disease can cause sneezing particularly involving root infections. Infections of the feline tooth can allow bacteria to establish in the nasal sinus with resulting inflammation and sneezing.

6. Allergies to pollens
Pollen allergies are much less common in cats than in people, but are not unheard of either.

7. Intranasal vaccines
Vaccines that fight against respiratory infections frequently cause sneezing for a few days after they are administered. The sneezing generally lasts for only a few days and goes away on its own, requiring no treatment.

If your cat sneezes only occasionally, no treatment is generally needed. However, if your cat has other symptoms such as discharge from the nose and eyes, the presence of blood or mucus in the nose, decreased activity or loss of appetite, have your cat examined by your veterinarian.