History
The story of the Scottish Fold begins in a barn.

In 1961, on a farm in Perthshire, Scotland, a small white cat was found in a barn. Her name was

Susie, and her ears were strange: they were folded down the middle and close to her head, making her look like an owl. When Susie had kittens, two of them were born with folded ears, one of which was taken in by cat fancier William Ross, who registered the cat in Great Britain and began to breed the kittens with the help of a geneticist. It was later discovered that the folded ears were simply the result of a dominant gene expressing itself.

Due to his extreme cuteness, the Scottish Fold is highly sought after and extremely popular.

Cat Facts
Here’s some more information on the Scottish Fold: 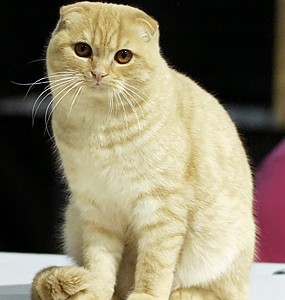 What are they like?
A cat as cute as the Scottish Fold could get away with anything, right?

Actually, the Scottish Fold is one of the sweetest, calmest cat breeds. He loves to be around people big and small, old and young, and also gets along great with other cats and cat-friendly dogs. The Scottish Fold, we have to admit, is kind of a perfect little cat. He’s energetic but not crazy, loves attention but not demanding, and will follow you around the house talking with you in a quiet, soft little voice.

Besides their cute ears, the Scottish Fold will charm you by sitting on his hind legs like a little furry Buddha! The Scottish fold also prefers to sleep on his back.

The Scottish Fold is a pretty healthy breed, but there are some hereditary health problems in the breed:

Right for you?
The Scottish Fold is a pretty neat cat, but there are always a few things to consider when welcoming a new pet into your home: