History
The Ocicat may look wild and exotic, but he's anything but fierce. You’ll find few breeds friendlier, and the Ocicat’s majestic spots are a sight to see!

The Ocicat is a young breed, the result of a breeding project by a CFA breeder named Virginia Daly in 1964. Attempting to breed an Abyssinian-pointed Siamese, Daly watched as the first generation appeared as Abyssinian and the second generation produced a spotted kitten named Tonga. Tonga, nicknamed an “ocicat,” was neutered and sold, but further breedings of Tonga’s parents produced more spotted kittens. In the following years, some Siamese and American Shorthair breeds were entered into the mix and voila! The Ocicat was born!

An officially recognized breed in 1966, the Ocicat is one of the most popular cat breeds in the United States.

Cat Facts
The Ocicat is a pretty neat breed, and here’s why:

What are they like?
Defying cat stereotypes everywhere, the Ocicat the opposite of aloof and independent! He is a gregarious cat who loves pretty much everyone. Whether looking for a lap or trying to play a game, the Ocicat isn’t afraid to jump right in and introduce himself.

He’s great at making himself the center of attention. Highly intelligent, the Ocicat is also as physically active as he is mentally active, so he needs a lot of stimulation. Puzzling toys are as good, asis a game of fetch! 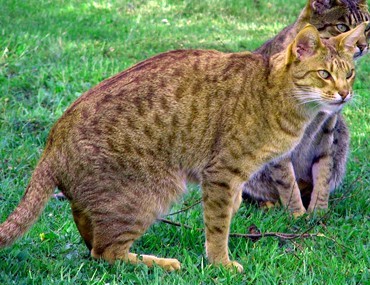 Also, the Ocicat is fantastic with children, gets along great with other pets, and is adaptable enough to be a joy to travel with.

The Ocicat is a relatively healthy breed of cat, but he does have some health issues that appear in the breeds that were mixed to make him:

Right for you?
Part of the allure of an Ocicat is his exotic appearance, and the other part is his great personality.  But, as with all pets, there are always a few things to consider when welcoming a furry friend into your home. Here are some things to consider about the Ocicat: