BackgroundThe name “Abyssinian” refers to ancient Abyssinia, which was located in what is now Ethiopia. But a lot of experts agree that this breed actually came from neighboring Egypt before eventually landing in Europe.

One story about the breed goes like this: a tiny female kitten named Zula was adopted by a British soldier and taken from a port in Alexandria in 1868. However, there’s no proof – the first time an Abyssinian was listed as an official breed was in 1882, and that cat had no known link to Zula.

Others say that the Abyssinian breed is thousands of years old and comes from ancient Egypt. They point to ancient paintings and sculptures that seem to depict the Abyssinian. They were first bred in the United States as far back as 1935, and today the Abyssinian is one of the most popular breeds in America. 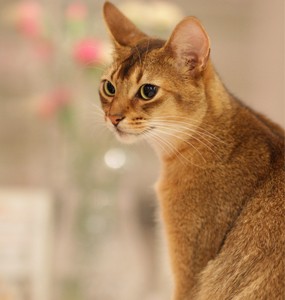 What are they like?
Abyssinians, known as “Aby’s,” look like wild cats, and they can act that way sometimes too! Acrobatic as circus performers and very athletic, the Abyssinian is very playful and has a ton of energy. They love interaction with humans and are very intelligent – even trainable.

They are also very good with older children that can keep them occupied and play with them. However, when it comes to other cats, they prefer to be the only show in town. It’s important to note that they do very well around dogs in the house.

Abyssinians spend their days climbing up high and watching their surroundings. A bird feeder near a window can keep them occupied for hours, as can puzzle toys.

Abyssinians are hearty, healthy cats, but they aren’t bomb-proof! Here are some hereditary issues to think about:

Right for you?
The Abyssinian is a great breed of cat for people who have the time to spend with one. Here are some things to consider if you’re thinking about welcoming one into your home: